tl;dr - A combination of pre-baked very heavy docker images, sccache, and explicitly setting CARGO_HOME and CARGO_TARGET_DIR will do it. If you’re squeamish about large docker images in your build pipeline, close this tab.

Today was the last day I put up with unnecessary rebuilds in my Rust CI pipelines.

Sure, I probably shouldn’t have ported this particular project to Rust (Nimbus is powered by Typescript and Rust), but when someone gives you strong type safety, performance, and static binary builds and tells you to pick 3, you start getting a bit trigger happy with language choice.

This isn’t about that decision anyway, it’s about how long I was waiting for builds. Let’s talk more about that.

cargo is awesome, but it often compiles and rebuilds things you wouldn’t expect during dockerized CI runs. I’m not the only one who’s had issues getting it right:

Now not all the problems above are relevant here, but the point is that builds were taking a long time, and they shouldn’t have, because I was already using an explicitly built -builder image (more on that later).

I chose to explicitly pay a image size penalty (you don’t want to know how many GBs this -builder container is) with a builder.Dockerfile like this:

You’d expect no building after this right? Well it works… on my machine (inside a docker container):

But that wasn’t the case in CI (which is also containerized) – running just lint (if you’ve never heard of just, you’re welcome) triggered some building:

A reasonable first solution is to use the built-in caching features of the platform – excellent CI systems like GitLab CI has excellent documentation and great features:

There’s only one problem with that – it can take over a minute to simply get the files out of cache:

You’ll also notice that despite all that, the project was still building stuff! Something just wasn’t caching obviously.

But why am I needing to use the CI filesystem cache at all?

The built code is already in the image – I’m lugging around this humongous image just so I avoid building costs later right?

What actually worked (the solution)

Well some hours later, I’ve found a solution that works, and here it is:

Here are the files that make this work out for me, and the relevant content.

And when it all works together, I get a beautiful 15 second build: 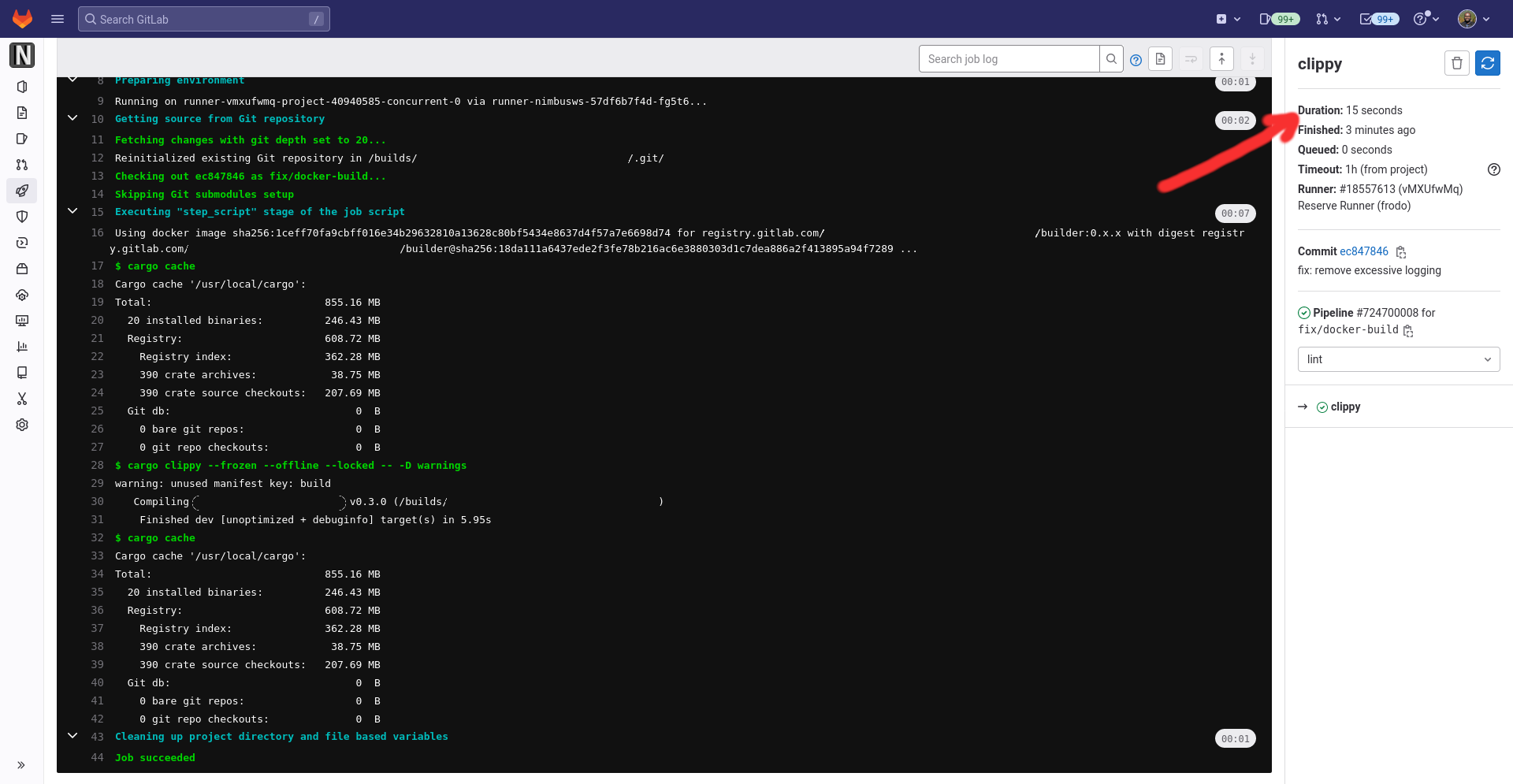 I hope this works for you and yours this holiday season. 🎁

Yeah, but what’s the catch?

Well, your build systems are going to have multi-GB images running around on them.

In practice, this probably doesn’t matter – as long as you have a reasonably powerful machine pull (and don’t run on a machine without any images too often), the base image is just already there (yay Copy on Write filesystems!).

I’m absolutely willing to trade a little hard-disk space, a requirement of very fast internet for builds that finish in seconds. Sure, I can’t push up my builder image from cafe WiFi, but maybe some day when we have powerful quantum networks even that will be solved too.

Remember the last time I did this?

Being annoyed by build times in compile-time type-checked languages with superior type systems happens to me from time to time:

What have I learned this time? sccache is cool, and outside of that absolutely nothing.

See you next time I break/slow down my build and burn hours trying to get it zippy again.