After some feedback from HN I also have an audio sample if you want to hear it!
(Turn the sound down a little! There's also a bunch of dead air after 15 seconds.)

tl;dr - Don’t chuck the Sony 1000XMs/AirPods just yet. Bluetooth headsets are more convenient, can have better mic quality, and none of the downsides. That said, throat mics might an improvement over a really bad, 20 year old standalone wired built-for-computers microphone (if that’s what you are using), and have slightly better background noise reduction if you’re not in a quiet room.

I don’t remember exactly when the thought first snuck into my head, but I’ve been a little obsessed with getting a throat microphone setup working for a while now.

What’s a throat mic, you ask? Well they look like this: 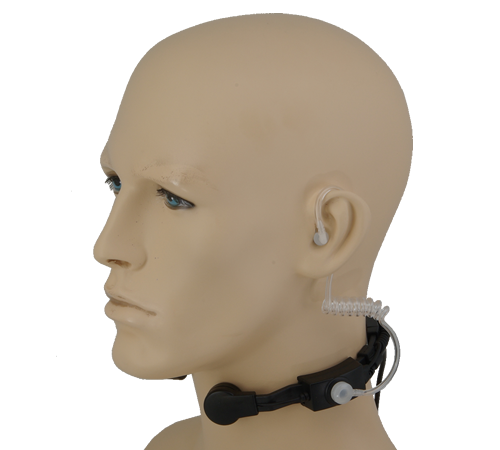 Your face probably has more features than that but you get the idea. For a better view of the one I actually bought: 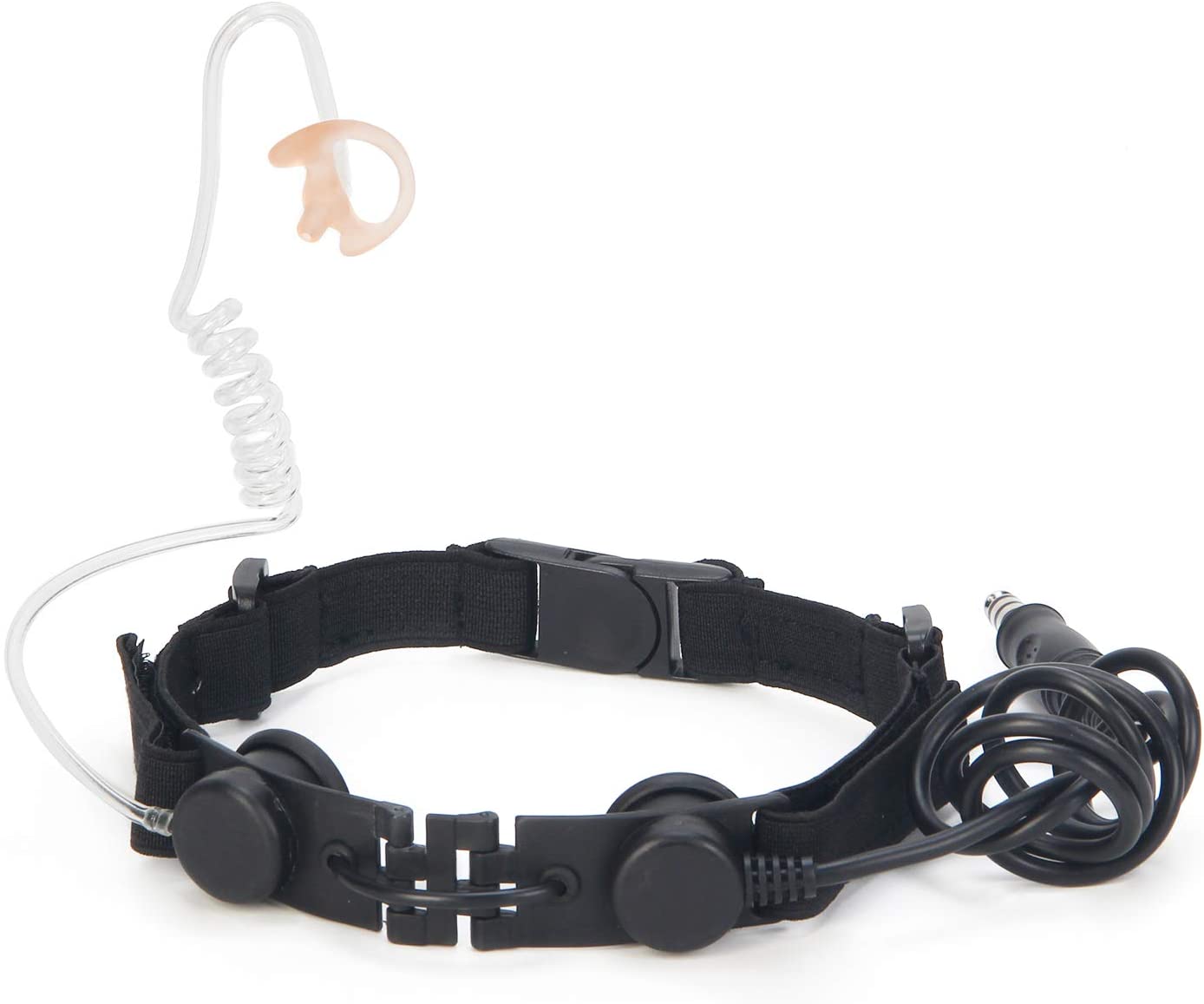 Here’s the story of how I scratched my itch.

What I knew about Throat mics going in

Like most, the common usage I know of is in the military industrial complex – I can’t say I’m a huge action buff, but operators going into sticky situations but not worrying about having to shield their microphones from wind or look like call center employees always seemed pretty convenient.

Somewhat related, the next most common group of customers for this tech seems to be the advanced-hobbyist airsoft/paintball crowd. Thanks to these people there are at least a few manufacturers making this tech relatively cheaply (most out of China, unfortunately).

And that’s just about all I know about them!

Yeah but why would you even think this was a good idea?

Like everyone else, I listen to a few podcasts. One thing that is quite common in seemingly expensively produced podcasts (and some cheap ones) is incredibly good sound quality.

Could Throat mics be the ultimate in high quality audio for cheap? (not really).

I also run Arch (btw), and one of the things that plagued me on a recent work engagement was my bluetooth headset not working consistently.

These days I’ve tweaked and grown quite used to my setup and rarely have issues, but back then there were a lot of issues:

Whenever I had problems with my mic setup, going to a plug in mic was one of the easiest ways to cut out some complexity and usually get sound working properly (sometimes even that wasn’t enough).

Headsets with mics that plug in are lame, decent quality (even with noise in the background!)

I also had a vague idea that this could be amazing for podcasts – Imagine if you could get that pefect voice quality for your podcast guests without the complicated sound setup and expensive external microphones!

Great, natural noise cancellation for the outside (no complaints about ACs in the background, youtubers!) along with decent sound quality.

Great for a home personal assistant?

Another place that I thought having a throat mic might be useful would be talking to a virtual personal assistant in a noisy place.

I wouldn’t want an Alexa or Siri or a Nest listening in but if I was running something self-hosted (let’s say HomeAssistant + VOSK or even CMUSphinx) it might be nice to have a throat mic so I could converse with the system even if ambient music was playing or there was noise.

Obtaining a throat mic and getting it working

I spent a bunch of time trying to find exactly what to buy, and ended up buying exactly one incorrect connector (and one extra throat mic by accident!).

I’m in Tokyo so I’m sometimes limited in what I can get shipped/purchase. It was surprisingly hard for me to figure out exactly what I needed to buy to get it to be usable on a computer, but here it is (so you don’t have to):

Note that the PTT connectors stay open when connected to a computer (no need to hold down the push to talk button or anything like that).

How it’s working out

Well I’ve been using a throat mic for a couple weeks now and it’s actually pretty good – sound quality is good, there’s a bit of protection from outside sound (though most of the time there isn’t much outside sound in my home!).

I don’t have any hard numbers (decibels, in particular) to share with you, (measuring mic/sound fidelity is not a competency of mine), but I am do have some feelings I can share! 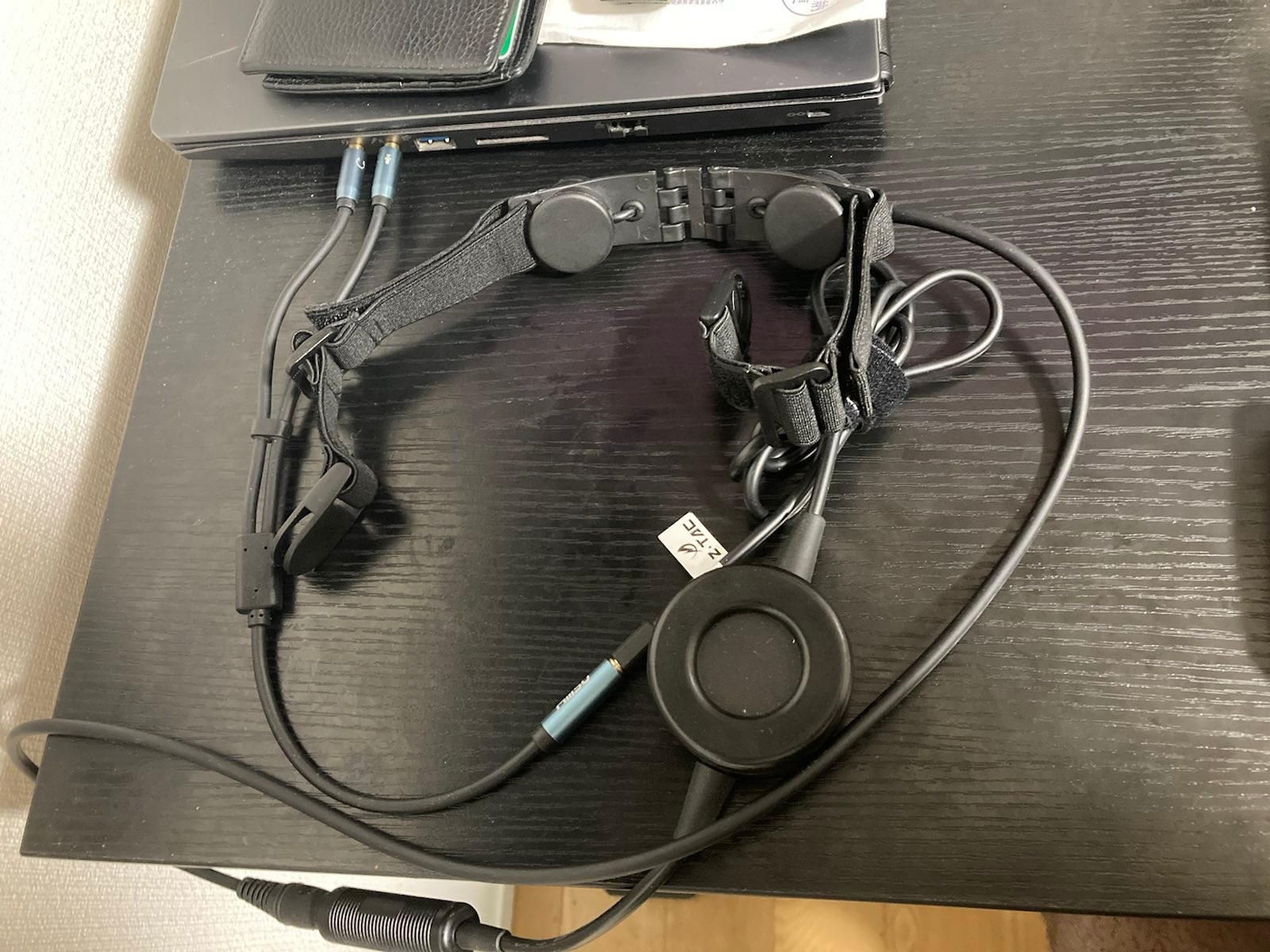 And a diagram of how it’s wired together

How it could be better

There are at least a few things that would improve this setup:

Obviously – it’s 2022. Either converting (via dongle) or getting a bluetooth-first version of this microphone would massively improve it.

There are Bluetooth transmitters (I bought a different one, actually), but I haven’t tried it yet (I bought a female-female 3.5mm adapter as well just to try!).

This feels like a perfect idea for a kickstarter – getting a manufacturer that already produces these units to produce a version of these units that has bluetooth and a small battery built in.

I could actually build this myself with an ESP8266, a small lithium battery and a 3d printer… Guess I have something to put on my list of projects. That would have probably made for a much more interesting post!

In a more MVP fashion I could probably build a basic version by just cutting down the wiring on a throat mic I have and connecting the 3.5mm -> Bluetooth dongle I bought… I might try that.

Try an expensive one?

iASUS Concepts (NOT related to ASUS, as a helpful redditor shared) also sells a range of throat mics at considerably higher cost.

While I doubt that the increased cost transfers to a large increase in sound quality, I sure would like to give it a try. It looks like iASUS Concepts does have a wireless one, though it’s pretty steep at $299! Looks pretty sick though.

A cursory search seems to indicate that there aren’t a ton of other wireless options for the throat mic… I wonder if iASUS concepts has a patent out or something – I can see whispers of one made by a company called Andoer but all the links are dead.

I don’t know if there will ever be an update to this adventure, but stay tuned?