tl;dr - I recently switched my baremetal cluster storage setup to OpenEBS ZFS LocalPV + Longhorn. Some issues with Longhorn not running on PVCs aside, the setup is flexible perf wise (ZFS LocalPV) and I at least have a low-complexity option for distributed/HA storage (Longhorn).

I recently spent some time working my way to my most flexible storage setup yet, and along the way I spent some time exploring whether Longhorn – a simple and easy to use storage provider for Kubernetes – could be run on PVCs rather than hostPath/local disk. I ran into a few issues with Longhorn (it doesn’t really work on PVCs right now) but a little pre-provisioned storage isn’t the end of the world. The rest of the setup is pretty nice so I thought I’d share a bit about it.

Up until now I’ve happily run and lightly managed Rook (in-cluster managed Ceph) on all my nodes. This worked great except for the fact that performance just didn’t scale. It’s to be expected of networked synchronous writes (the best writeup I’ve seen of the perf tradeoff is here), but I was happy with the tradeoff until I wasn’t. I started also having problems with Rook not making the amount of OSDs (attempting to boost the throughput on NVMes led me to try that) so I started looking elsewhere.

If we zoom out a bit I’ve tried a quite a few k8s storage options over the years (I’ve done some benchmarking):

I’ve used OpenEBS in the past and am very happy with their offerings. OpenEBS Jiva was one the first storage providers I used and I was really happy with how simple it was to set up (in comparison to Rook/Ceph).

Since what I wanted here was performance, I gave them another look since they’ve got some better-than-local options in the local disk space. OpenEBS has a lot of offerings so let’s break it apart a bit.

On the networked drive side (likely highly available, low perf):

On the local drive (high perf, not highly available)

So lots of options, it’s a veritable Smörgåsbord! Let’s take some time to think through it.

What do I actually want out of my storage setup?

Of course before I can figure out the best solution, I need to figure out what I actually need/want. Of course as a world class yak-shaver not all of these things are strict requirements, but no one writes home about storage setups that are not resilient right? Anyway here’s a Maslow-esque hierarchy of needs (most important first): 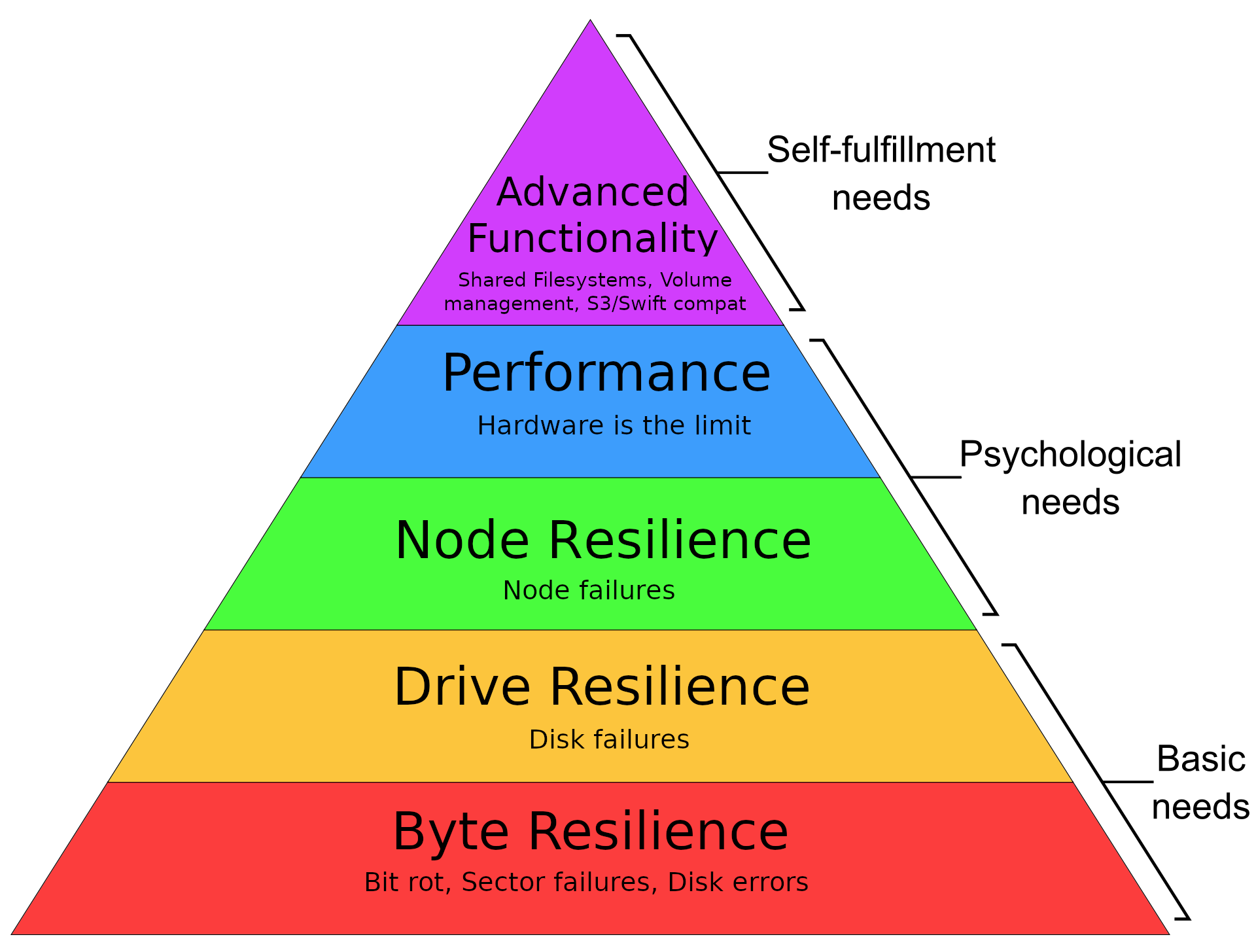 Up until I was happy with my setup, in particular the following:

I loved the following about this setup:

All-in-all the setup works pretty well, but the whole reason this post is here is that there are some issues:

I realized that running everything I want to run on Ceph (particularly databases or other high write workloads) was simply a non-starter with the hardware I have/am willing to purchase and setup. If I had access to a some crazy SAN or even just wanted to buy 10 drives and do lots of striping to try and boost the IOPS an dbandwidth sure, but I’m not willing to do that. Up until now I hadn’t really given performance enough thought – I run a ~5 databases and a bunch of other storage-enabled workloads and they’re doing just fine but I figure if I’m going to solve this earlier rather than later is better.

Stumbling onto the perfect setup

While thinking about my options in this space I started coming back to an interesting combination – OpenEBS ZFS LocalPV + Longhorn/Ceph. Let’s break down the choices individually:

A few reasons why ZFS LocalPV is a good fit:

A few reasons on why Longhorn is a good choice for me, generally in comparison to Rook/Ceph:

Overally this choice is a bit sketchy but I’m pretty happy with the tradeoff because of how much more complicated Ceph is. If I ever get really annoyed with Longhorn I can always switch it out with Rook/Ceph or even LINSTOR down the road and feed ZVOLs or Block volumes, so for now I’m going with simplicity till I need something more.

What boxes does this “perfect setup” actually tick?

OK, let’s get back to that hierarchy, what makes this setup actually good?

What are the pros actually doing?

Proper cloud providers have a bunch of things that make them much more performant than the setup I’m whipping – they’ve got access to Hardware Storage Area Network (SANs) that they can run in one data center and have their disks in one place and their servers (with fiber connections) in another. Adding drives and using striping with appropriate RAID5/RAIDZ and other solutions gives them the ability to scale vertically much easier without sacrificing data integrity by just adding more disks, and without losing much speed network wise (with most data center traffic being essentially local and very fast).

I do know that that some providers run Ceph but I’d love some input from people in the space on just exactly how much heavy lifting custom SANs are doing relative to the software layer. Even just hardware RAID can offer a perf boost that I can’t go for.

What does it look like to actually set up this frankenstein on the hardware I do have access to?

In the end getting this setup up and running at a high level means:

To make this concrete, if a machine I have comes with 2 512GB NVMe disks my automation sets up:

On top of that, at the k8s-and-above-level I set up:

Setting up Longhorn to run on PVCs? Easy Peasy right?

Since I saw (but never tried) PVC support for Rook, I hoped Longhorn might have something similar but unfortuantely it didn’t. I ran into a few issues but at the end of the day Longhorn’s simplicity is still mostly unmatched and I’m very grateful to the Rancher team for releasing this awesome software for people to use for free.

Since I run k0s, I needed to set a non-standard kubelet directory on the driver deployer:

A small change but super important for those who run k0s or k3s or other similar projects.

Issue: Getting access to volumeClaimTemplates by converting from Daemonset -> StatefulSet

By default the all-in-one Longhorn resource file (ex. https://raw.githubusercontent.com/longhorn/longhorn/v1.2.0/deploy/longhorn.yaml) you’re going to get a DaemonSet piece called the longhorn-manager. This sits on every node and negotiates storage for the various PersistentVolumeClaims that are created. Weirdly enough Kubernetes only supports volumeClaimTemplates for StatefulSets, so if I wanted a truly PVC driven setup, I needed to change longhorn-manager to a StatefulSet. There are two suboptimal things this forces:

There are a few bits missing becasue I use kustomize to do my templating – so in my overlays/<cluster name> folder I have a strategic patch merge that looks like this:

This was good enough to get me off the ground with regards to getting longhorn-manager running on PVCs rather than hostPath.

Issue: Longhorn PVCs won’t attach on nodes that don’t have a longhorn-manager running

This is just a bit of how Longhorn works – it turns out the longhorn PVCs won’t get created on nodes where longhorn-manager isn’t running. Unfortunately I didn’t record the exact error to put here, but I fixed this with nodeSelectors on the appropriate workloads to restrict to nodes where storage.longhorn=true.

While the longhorn-manager was running, the UI was usable, and the drives actually got Bound, I ran into an issue that sunk the ship (and forced the solution I ultimately went with). It turns out ancillary longhorn containers use hostPath and do things with the shared paths that other pieces depend on. In particular, this manifests itself as binaries being missing. Here’s an excerpt from longhorn-manager (I believe?):

While debugging this I went to check the position on disk:

I definitely didn’t expect the folder to be completely empty. I started doing some reading on [bidirectional mount propagation], which turned out to not be the problem (but is an interesting requirement). After some head scratching I started theorizing that the ancillary workloads (pods triggerred by longhorn-manager and friends) were actually doing the binary downloading. That said, it was possible that I was overwriting some binaries that were supposed to be in the longhorn-manager container so I ran it locally:

Well that leaves only the theory about the ancillary containers downloading the binaries – and a quick check of the contents of the resources was enough to validate my assumptions:

Once I checked on a one of the longhorn nodes I saw that the disks (which are the root OS disks!) had the files that were being searched for:

At this point I thought I had only two choices:

(1) is the easier solution and (2) seems like the “right” solution (though PVC support in Rook was somewhat late as well), so I took some time and asked the Longhorn team. Turns out it’s possible but pretty hard, so (1) is the far easier option, and what I went with after all.

So to go with that, I had to revert back to the DaemonSet (which felt better conceptually anyway) and use a hostPath that is backed by a mounted ZVOL.

So I happened to do a few fio runs (thanks to the excellent dbench which I’ve made some changes to) on both ZFS (during some separate storage experimentation I haven’t written up) and Longhorn, so here are some results to look at (unfortunately in textual form):

fio is kind of annoying – In the future I’m likely going to have to stop using libaio since it makes for some really annoying/inconsistent results. I might also start working in some more tools like I did in the past – pgbench, sysbench or even dd. Right now I’ve got a few nice little Job that I carry around and use with fio so it’s very convenient.

Anyway, in general we can at least talk about the scales on which the different runs are – generally:

Hostpath has some great high level numbers for random reads/writes:

ZFS (RAID1) on top of that has drastically worse performance:

And Longhorn (psync) numbers are the worst of all (as we’d expect):

Raw output from fio for your perusal

Generally expected to be the highest possible performance, hostPath folders on a given node that has the relevant storage attached. If you care about this kind of thing, the storage driver is libaio and I’ve toggled O_DIRECT on fio. This is the theoretical limit

Longhorn on ZFS on NVMe

When running these tests I used my custom version to vary the IO engine – the numbers from psync look a lot more consistent/represenative of what you’d expect.

Well this was a fun exercise in combining solutions, and at the end of the day I have a setup I’m pretty happy with – allowing workloads with relatively small storage demands to float around, and with the option for storage-performance-critical workloads (which usually handle their own replication, like Postgres) to use closer to raw speed storage.

Hopefully this saves some people some time out there in deciding what to do with their storage setups. The vast majority of people are probably very happy with their local cloud provider storage provisioner but for those running on bare metal or looking for something different, this information might be useful.